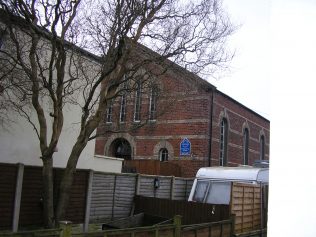 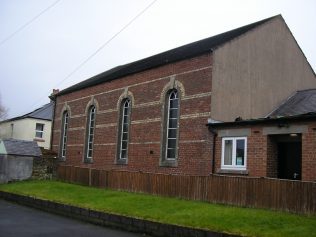 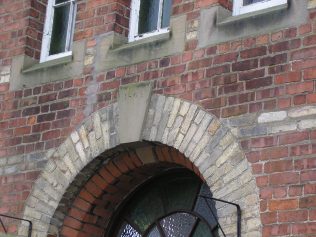 Longtown Chapel was built in 1865-6 after a group of people who had moved from Westmorland to Longtown to work in a local bobbin mill had asked the United Methodist Free Church  to provide services in the town. At first they net in a house in Netherby Street and then in a large room provided by Messrs P Dixon of Carlisle. When tat proved to be too small they met in the Mechanics Hall until the chapel opened on 11th January 1866. The contractors were J Metcalf (builder), R Ormerod (plasterer), and W Davidson (joiner). The foundation stone for a schoolrooom was laid inon 31st March 1937 and an organ was brought from Carlisle Lowther street after it closed.  The Chapel had 200 sittings in 1924. The chapel was 40 feet by 30 feet and in 1941 it had 200 sittings in pews and on forms. There was also a school, 24 feet square and 2 vestries. There were also four houses each containing four rooms, one of which was occupied by the caretaker. By 1980 and 1991 the sittings had been increased to 250 and there were two other rooms. The chapel remains in use as a Methodist place of worship.

Longtown Chapel was built of red brick with white brick facings and bandings in a classical style . Among smaller chapels it is unusual in both respects. Netherhouse (Wesleyan Methodist 1833) and Skelton (PM 1865) are similar in style but both were built with the local stone. The nearest contemporary parallel is probably Alston (Wesleyan Methodist 1867) which is classical in style and was built of pale yellow stone was with red sandstone facings. Temple Sowerby (Wesleyan Methodist 1872) has white bricks and red sandstone facings but is in the gothic style. Whatever the thinking behind this preference for contrast the main effect was to make the buildings stand out among their stone built or rendered neighbours