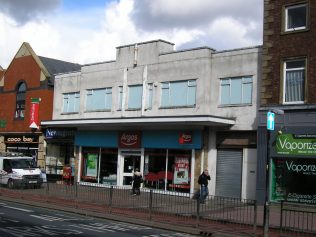 The first place of worship on this site was a temporary wooden “tabernacle“. The foundation stone of a “handsome,” permanent replacement was laid in April 1836. It was paid for by issuing 700 £1 shares. After the wooden building was demolished the congregation obtained the use of the Town Hall for Sunday service, but finding that it was too small they also obtained use of the Baptist Chapel in Fisher Street (a former Wesleyan Chapel) and succeeded in filling both buildings. The Sunday school met in Mr Sawyer’s large room in Fisher Street. In 1851 the chapel had 900 free and 100 other sittings. By 1924 these had been reduced to 400.It was closed shortly after Methodist union. The congregation joined with Cecil Street and the building was sold, demolished and replaced by retail premises.