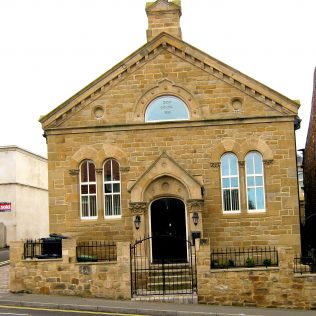 The Methodist New Connexion began meeting at Sheriff Hill, Gateshead, around 1830 and such was their success that a chapel was opened on 11 February 1836 at a cost of £242 15s 10d. The money was raised by the members and generous donations from local land-owners and business people including William Rickaby, the Sheriff Hill Potter, who gave £20 6s 5d on the day of the foundation stone-laying (2 Nov 1835). The chapel was opened by James Forsyth.

A Sunday School was commenced in 1839 and a Day School in 1855, both proving very successful in the village. The chapel opened up many new opportunities for the village residents and their children. On 20 July 1857, the children of the Sunday School travelled to Ryton on the Carlisle Railway and a couple of years later, to Lumley Castle. All very far away in the days before buses and cars!

Given the size of the village, membership of the chapel was quite large with 60 adults and more than 200 children attached to the Sunday School. These numbers increased significantly when the Rev William Booth (later the founder of the Salvation Army) became the minister. William Crow, the printer who Booth appointed to print posters for the arrival at nearby Felling of the first “Hallelujah Lasses”, was a Trustee of the chapel even after his removal to London. The chapel folk maintained a link with the Christian Mission – later called the Salvation Army – until the late 1940s.

By 1886, the Trust realised that little had been done to pay off the debt of the chapel which had grown since the addition of a new Sunday School hall in 1884. It took valiant efforts of all the members to eradicate the debt by 1890 including the holding of sales, sewing meetings, children’s events, magic lantern shows and coffee suppers.  It was reported that attendance was very low at these times – only 110 in the morning, 114 in the afternoon and 148 in the evening,

Further building alterations took place in 1891 when the Trust agreed to the installation of an organ from Messrs. Vincent of Sunderland. Sadly, no photographs survive of this instrument which had a depth of 7ft 6″ and a height of 14ft 3″. It was hand-pumped until 1952 when Vincent’s installed an electric blower and a tremulant stop.  The chapel choir began in 1866 and that Christmas Day went out Carol Singing commencing at 3 o’clock in the morning.

Following Methodist Union, there were many attempts to unite the Zion (MNC) and Providence (UMFC) chapels but all failed until May 1942 when the two Trusts finally resolved their differences. The new Society was named Sheriff Hill Methodist Church – which it still is today.

Suggestions were made for a new chapel to be built in the village and the site of the old Wesleyan Chapel on Blue Quarries Road was considered. Despite having more than £615 in the Building Fund and more than sufficient members to make the new chapel favourable, the Borough Surveyor refused to allow the sale of the Blue Quarries Road site as it had been earmarked for council housing. A further suggestion of Southend Terrace was also refused. It wasn’t until 1961 that the Church and Council finally agreed where the new church could be built at the junction of Kell’s Lane and Old Durham Road. Estimates for the new building were obtained in 1966 at £8,000 but this rose in 1970 to £26,000, by 1973 to £42,950 and by July 1986 to over £52,000. Providence chapel was sold and the land used by Gateshead Council to construct housing. The Zion chapel was sold for £6,000 in August 1973 and the new church opened.