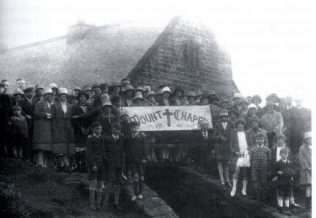 zoom
Members of The Mount chapel standing on the top of the tunnel that led to the chapel doors, 1927
Image from the collections of the Newcastle upon Tyne District Archives 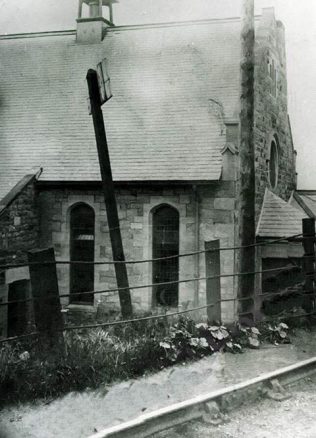 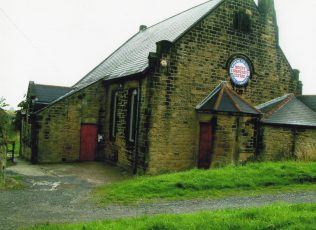 The original chapel on this site was opened by the Wesleyan’s in 1777 having taken more than four years to build. The chapel was rebuilt around 1868 however members were by then starting to move away from the area. Nearby Springwell Village had begun in 1825 with the opening of the colliery and the railway (now a Scheduled Ancient Monument). The pitmen and their families mostly lived in cottages at The Mount, Eighton Banks, and walked the mile or so to their work. When they began to move to the new village, it was decided that a chapel should be built and so members gradually drifted away from Eighton Banks and particularly from 1881 onwards.

In 1883, the chapel was sold to the United Methodist Free Church who carried out some minor alterations to the premises. The building remained in use as a Methodist Church until closure in 1981 and still stands – now used as a Community Centre.

Access to the chapel was difficult as members had to cross the railway line that ran immediately outside (within 6ft of the chapel walls) and so a tunnel was constructed which was lighted by lamps from 1900. The railway – one of the busiest colliery railways in the area – caused little disturbance to the chapel except for the shunting of wagons at weekends which lessened following a complaint in 1928.

In 1903, the choir seats were moved and raised so that the choir could better hear the preacher and in 1904 a Communion Rail was installed. The Mount were known for their excellent choir which numbered 52 members in 1927. A new heating system was installed in 1924 with the entire cost being met by a bazaar held in nearby Springwell.

The building of new terraced housing in Eighton Banks brought many new members into the Society coupled with the regular open-air meetings and services conducted by the chapel folk. In January 1925, a series of mission services were regularly held at Walmer Terrace and in Springwell Village. These carried on until the last one held on 23 July 1927, the date chosen to celebrate the 150th anniversary of The Mount Chapel.

In 1928, despite still having more than £200 debt on the chapel, the Trustees purchased 9 Chapel Row and initially it was rented out at five shillings per week until 1931 when, with the growth of the Sunday School, the house was used as classrooms. This continued until 1933 with the purchase of two wooden bungalows that had previously been used as interim housing at Elizabethville (a nearby Belgian Refuge Colony). The huts were used by the Sunday School until taken over by the Home Guard in 1941. The chapel and village were not close to the River Tyne however, there were searchlights and ack-ack guns sited not far away – indeed, the chapel and land surrounding it was used to store explosives for a number of years.

The difficulties of sharing the chapel premises with the military during the war, led the Trustees to consider uniting with the Jubilee Avenue (ex PM) chapel in 1943 but the conversations didn’t come to anything and it wasn’t until 1972 when the matter would be raised again.

Whilst having a wonderful choir in the chapel, their singing was accompanied by either a harmonium or a rented piano and it was not until 1925 that Blackett & Howden installed a WWI memorial organ at a cost of £227. The organ was partially rebuilt in 1946 but damp and general wear and tear resulted in it being almost unplayable by the 1950s though it was playable at the chapel’s first wedding in 1955.

When the UMFC purchased the chapel it had, until then, been lit by tallow candles. The Trust lost no time in installed the “new” gas lighting – these were replaced in 1946 with electric lights and 4 sockets. The organ was also fitted with an electric blower.

Joint meetings and services began between The Mount and Jubilee Avenue chapels in 1964 at the instigation of the Circuit Quarterly Meeting who had already begun the task of amalgamating and closing churches. By July 1968, membership at The Mount had reduced to 43 and the Sunday School had closed. By 1974, it was evident to all concerned that a union of the two remaining Eighton Banks chapels had to take place. The Leaders at The Mount favoured their premises as being better fitted to provide overall accommodation for one Society but the matter had to be referred to the General Purposes Committee for a decision and they favoured the Jubilee Avenue building. The amalgamation eventually took place and The Mount was sold in 1981 to become a Community Centre which it remains to this day. Incidentally, the Jubilee Avenue chapel closed on 28 February 1996 and was converted into two luxury houses, whilst some of the members transferred to Wrekenton Methodist Church