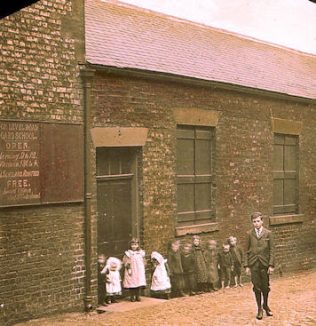 zoom
The former Wesleyan chapel premises were later used as a Day School, as seen here in 1901
Image from the collections of the Newcastle upon Tyne District Archives

In 1867, members of the Gateshead UMFC chapel opened a mission in the former Pipewellgate Wesleyan chapel on High Level Road. The Society, although operating in a very run-down area of the town, prospered and they moved to premises on Charlotte Square, off Askew Road in 1871.

In 1886, a site was obtained at the corner of Marian Street and Cuthbert Sreet for a new church. The foundation stones were laid on 8 April and the building opened in September, both 1867.

An early convert at the Pipewellgate Mission was Daniel Barnes, a chimney sweep, whose conversion caused “a considerable sensation in the town”.