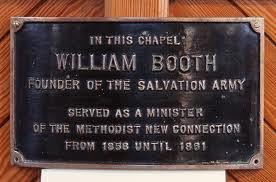 zoom
Pencil sketch of the chapel in 1836 and photograph prior to demolition in the 1960s. The plaque used to be in the Gateshead Salvation Army citadel
Images from the collections of the Newcastle upon Tyne District Archives 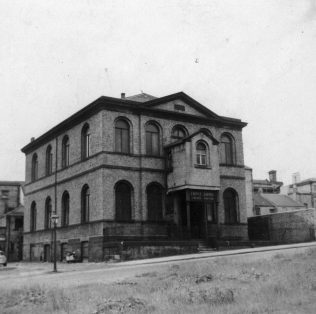 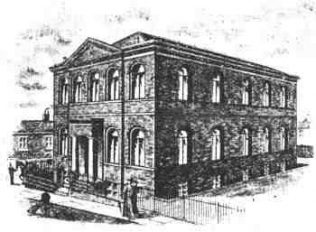 In 1831, Joseph Forsyth, a Wesleyan minister, was expelled from the Gateshead Circuit as “an unfit person to be united with the staff of ministers”. About 800 members of the Connexion left with him from fifteen Societies across Gateshead.

Initially, Forsyth took up preaching in Hymer’s Court – a very poor area of the town, though collections amounting to £30 were sufficient to provide him with a comfortable house. Subsequent meetings were held in the long room of the Grey Horse Inn on High Street and thereafter, in a schoolroom on East Street. Later still, a former theatre was acquired at the top of Bottle Bank and then a large room in Half Moon Lane where a string band was assembled to accompany singing.

Three generous benefactors gave £50 towards the building of a chapel in the town and William Falkous, one of those who left the Wesleyan cause in 1831, purchased a field from Cuthbert Ellison with a view to building on it, in February 1835.

The Trustees, all local men of some note including John Allen of Felling Shore (in later years the Allen Memorial MNC in Wallsend was named after him) held a meeting on 30 April 1835 in the long room of the Earl Grey Inn, Gateshead, at which the Trust Deed was settled and various matters resolved including that Forsyth should be banned from preaching in the Society if the Trustees so wished. The meeting riled Forsyth as he was away in Heckmondwyke at the time and neither he nor any of the members knew what was taking place. The day following the meeting, John Allen noted in the Trust Minutes “we have got the Gateshead Chapel settled just in time”.

Discussions then began with the Methodist New Connexion Northern Association “solely for the purpose of religious fellowship” however, Forsyth never foresaw union with the Connexion as being in the best interests of his flock. In his pamphlet, he states that the union to the New Connexion was “fraud and perjury sanctioned by the Conference” which had “driven us from it and divided and scattered a once happy and united people”. The people weren’t that united and happy and, shortly after the opening of Bethesda chapel, Forsyth split from the congregation and went his own way.

Edward Smith of Felling Shore chapel cut the first sod of ground and was the first to enter the chapel’s doors when it opened on Good Friday, April 1836. The chapel was packed out for the opening services and the string band, by then a violin and wind band led by Joseph Gillender, accompanied the choir and hymn singing. It would be many years later before an organ was installed.

All went well until 1840 when the minister fell out with the Trustees and chapel leaders and left to start another church. Joseph Forsyth went to America where he was re-admitted to the Wesleyan cause for a while. The new minister appointed to Bethesda was Joseph Barker but he was refused from preaching in the chapel for attacking the doctrine of the Holy Trinity. About 4,000 members of the New Connexion left when Barker vacated Bethesda.

Following Joseph Barker, ministers included Dr Crocker, Dr Croft and Rev Francis Sewell. It was during Sewell’s appointment that the chapel was freed of debt. The building was often packed out, particularly with young people. A much-looked forward to event each year was the Whit Tuesday gathering when 1,200 Sunday School children and their teachers would converge on the chapel for a couple of hours and a special service. Afterwards, with banners waving, they would march back to their own chapels across the Circuit for tea – chapels from Washington to Winlaton.

There were 90 members on the chapel roll when, in June 1858, William and Catherine Booth arrived to take charge of the Gateshead Circuit. Within the first fortnight of his arrival at Bethesda, there had been 160 conversions and the chapel was filled to overflowing – it could seat 1,200 but people would sit on window ledges, stairs and any other available spot to be able to hear Booth preaching.

During the Whit Sunday 1860 rally, which should have been held on the Windmill Hills except for the stormy weather, Catherine Booth got up to “say a few words” that led on to a two hour sermon delivered without notes. In later months, when William was confined to bed due to illness, Catherine conducted all of his preaching appointments and pastoral duties and developed a reputation that would stay with her to the end of her days.

In 1861, a ten day mission was held in the Circuit when Booth preached in all 14 of the Circuit’s chapels culminating in a meeting at Bethesda which attracted more than 5,000. By then, the chapel was known locally as “The Converting Shop”.

Disagreements with the Methodist New Connexion led Booth to leave and eventually he formed the Christian Mission, later called the Salvation Army. The effect on Bethesda was devastating with many members leaving and attendance at services wiped out. When Rev. Chambers visited the chapel he had as congregation one Sunday morning, the organist, the choirmaster and five people.

The chapel on Melbourne Street was in the north of the town but Gateshead was developing south of the River Tyne and in 1895 the dwindling congregation took the bold step of securing land for the erection of new premises away from the town centre. Foundation stones were laid on 25 May 1895 in readiness for the new church at Whitehall Road.