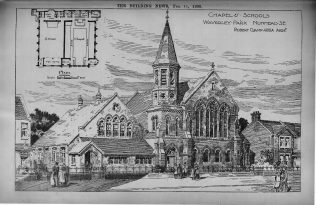 This chapel was the last one built by the MNC in London. The design by Robert Clamp of Woking was chosen in a limited competition.

According to The Building News the site was given by the adjoining owner, but was only 100 feet wide by 90 feet in depth. Onto this space it was proposed to erect a chapel to seat 400 and a hall or schoolroom for the same number. By uniting the two buildings in one block space was economised. Built of brick, with dressings of Monk’s Park stone, with the upper part of the turret being in oak. the cost was under £300.

In 1904 a survey found that the morning congregation consisted of 29 men, 38 women and 90 children. The evening service attracted 40 men, 80 women and 86 children.

The 1940 statistical returns stated that the church could accommodate 250.

The church closed in 1947, but the building still exists as can be seen by this photograph The wooden turret seems to have been removed.

Further information would be welcomed.

The Religious Life of London. Hodder and Stoughton, 1904 p233