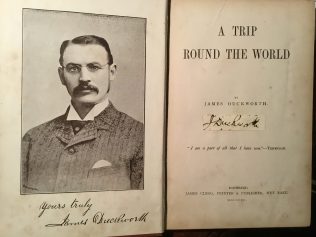 Sir James Duckworth (14 February 1840 – 1 January 1915) was a self-made businessman from Rochdale, Lancashire who rose from poverty to found a large chain a grocery shops known popularly as “Jimmy Duck’s” and entered politics as a Liberal. He served three times as Mayor of Rochdale, and was elected twice as a Member of Parliament (MP).

Sir James Duckworth was a committed Christian, a lifelong member of the United Methodist Free Churches (UMFC). He attended Baillie Street Chapel and later Castlemere, William Street Chapel when it was built. He was a leading figure in the UMFC denomination. In 1894 he was made president of the Annual Assembly. As a layman he was one of only two to be given this honour.

He was the first Rochdale mayor to observe ‘Mayoral Sunday’ and on Sunday 13 November 1892 he and the Corporation attended the morning service at St Chad’s Parish Church and in the evening at Castlemere UMFC.