You are here: HomenextAboutnextWho were the United Methodists?nextA West Country sort of Methodism

A West Country sort of Methodism 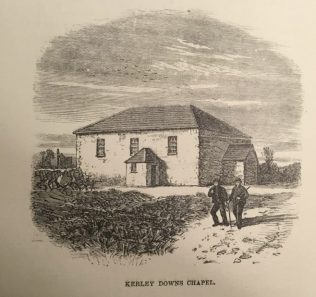 My grandmother lived from the 1890s to the 1980s – and thought herself a Bible Christian until she died. Yet in 1907 the Bible Christians merged with two other small branches of Methodism to form the United Methodist Church; she and her contemporaries “belonged to be” Bible Christians.

In my early teens I asked, “Who were the Bible Christians?” and was told,

For all its vagueness, that is the answer. They were most certainly Methodist in their principles and practice, and their early name was Arminian Bible Christians. They had pastors instead of superintendents, and elders’ meetings instead of leaders’ meetings. But what’s in a name?

There were the lady ministers… well, yes – they were pioneers there. By and large their strength was in the West Country, mostly in rural communities. Yet they were no intellectual sluggards; Sam Pollard (1864–1915), one of the second pair of Bible Christian missionaries to go to China, was the only Methodist minister to invent a script to create a written language out of a purely spoken one (Miao). And when, in 1907, they merged with the Methodist New Connexion and the United Methodist Free Churches, they were the fastest growing branch of British Methodism – a pity no one at the time asked, why?

The Bible Christians had but three ‘leaders’ in their 92-year life. They began as a revivalist movement under the charismatic evangelism of William O’Bryan – rejected Wesleyan ministerial candidate, twice an expelled Wesleyan, and self-expelled a third time in 1815 from the Stratton Mission in north Devon. Better at keeping his own rules than observing others’, and incapable of coping with the inevitable as the Bible Christian movement evolved from a missionary community into an institutional Church, O’Bryan was a flawed human being. When crises came to a boil in 1829, he separated and formed his own breakaway Bible Christians. Yet he could not sustain them; in 1831 he emigrated to America and his breakaway group rejoined the Bible Christians in 1835.

By then James Thorne (1795–1872) held the reins. He was the son of the family from Shebbear in rural north Devon where O’Bryan had founded his first new society. Thorne was the father figure needed after O’Bryan’s hot-headed enthusiasm, and under his sure footed guidance from 1830, the movement consolidated its position and completed the evolution into a connexional Church.

Frederick William Bourne (1830–1905) was a man of Kent – one early area of Bible Christian expansion. From his first connexional office in 1860, he became the movement’s guide and spokesman, and steered them towards the 1907 union. He would have graced – and held high office in – any Church.

From the start, the Bible Christians used lady ministers, including William O’Bryan’s wife Catherine, and his daughter Mary, who married Samuel Thorne. Mary’s tombstone at Shebbear records her status as “a minister 60 years”. The Bible Christians were well aware of the appeal of female ministers and William O’Bryan used them as pioneer evangelists. Mary Ann Werrey from near Looe, in Cornwall, filled that role in her late 20s in the Channel Islands, on Scilly and in the north of Northumberland. She travelled further north and preached in Edinburgh, although with that we lose sight of her.

The lady ministers were in theory not supposed to be leaders, nor to rule circuits, yet when a lady minister was the only minister in a circuit, who else did the job? Such was their final lady minister, Lillie Edwards, who was stationed at Hastings when the 1907 union came about. Lady ministers were not in the polity of the United Methodist Church, so Lillie Edwards was relegated to ‘Special Agent’. Yet there is evidence that she just continued to do the job – and be paid for it – until she retired a few years later.

The best known Bible Christian is Billy Bray (1794–1868), whose fame is based on his biography by F W Bourne, called The King’s Son – his own title for himself. From central Cornwall, Billy was by no means a typical Bible Christian, although his eccentric preaching and childlike trust in God were perhaps an extreme example of an ethos within the Church. He was responsible for building six chapels; just one remains, commonly known as ‘Three Eyes’ on Kerley Downs near Truro (on account of its original three windows). Billy was a local preacher and should never be confused with the two Bible Christian ministers called William Bray.

Some of their chapels

(Locations are given as eight-figure OS Landranger map references.)