You are here: HomenextAboutnextWho were the United Methodists?nextWesleyan Methodist Association (1835-1857) 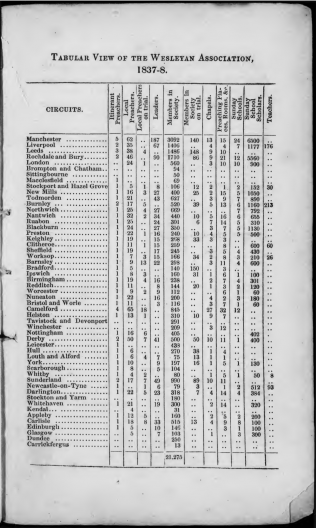 The Wesleyan Association came into being through a proposal to establish a ‘theological institution’.  In 1833 the Wesleyan Methodist Conference appointed a committee to draw up a plan for a formal training of ministers and Jabez Bunting, who was the Missionary Secretary, had twice been President of Conference, served two periods as Secretary of Conference and was Convenor of the Stationing Committee was one of the members of this committee.  The proposal presented to the 1834 Conference was to set up an institution with Jabez Bunting as “President of the Theological Institute and Theological Tutor”. This was accepted and the Institution established.  Many felt that too much authority was being concentrated in one man’s hands. Bunting had already been involved in one secession, that of the Protestant Methodists. Dr. Samuel Warren, Superintendent of the Manchester First Circuit led the opposition, going into print. For this he was suspended.

The approval of the scheme aroused opposition in the circuits, especially in the north. At a meeting in November 1834 a ‘Grand Central Association’ was formed and next April over 100 people met to demand self-government in the circuits and representation in Conference.  Conference’s response was to expel Warren. Having been joined by the Protestant Methodists, delegates of the dissidents met and called their first Annual Assembly in Manchester in 1836. The outlines of a constitution were worked out, including the principles of free representation in the Assembly and the independence of the circuits, embodied in the Foundation Deed of 1840. In 1839, the word Methodist was added and the Association became the Wesleyan Methodist Association.

Another group, the Arminian Methodists who were revivalists expelled by the Wesleyan Methodist Conference on doctrinal grounds, also joined the Wesleyan Association in 1837. They had 1,800 members being based around Derby, and were radical for the time in making use of women preachers.

In 1838 the Wesleyan Association had 21,275 members and the table shown in the image also reveals their geographical spread. The Methodist Almanack of 1849 reported that the WMA had 322 chapels and 200 preaching places by that date, and two years later 419 places of worship were reported as part of the Religious Census. Attendance on 31 March 1851 was recorded as 32,000 in the morning and 40,000 in the evening. Membership seems to have remained static until 1857 when the WMA joined with half of the Wesleyan Reformers to form the United Methodist Free Churches.

Details of Circuits, chapels and ministers may be found in the Free Methodist Manual of 1898 which will feature elsewhere on this site.

A report of the extraordinary proceedings which took place at a meeting held in the Music-hall, Leeds, on Wednesday,December 17th, 1834, for the purpose of explaining the objects and principles of the United Wesleyan Methodist Association