You are here: HomenextAboutnextWho were the United Methodists?nextMethodist New Connexion

no taxation without representation 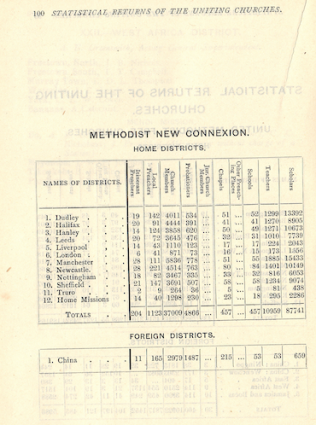 zoom
Statistical view of the Methodist New Connexion in 1907

The New Connexion was inaugurated on 9 August 1797 at Ebenezer Chapel, Leeds by Alexander Kilham, William Thom, two other former Wesleyan Methodist itinerant preachers and thirteen laymen. Kilham had been expelled from the old (Wesleyan Methodist) connexion in 1796 and in 1797 the Wesleyan Methodist Conference had refused to allow lay representation. 5,077 members (about 5% of Wesleyan Methodists) joined the new body. Some of them held radical political views, but as the following quotation shows most of their ideas would be regarded as mainstream, and correct, these days.

‘The Methodist New Connexion came into being for the establishment of the following principles:

Kilham himself summed this up “Every member of the church is entitled to participate, either personally or representatively, in every act of its legislation and government.”

“The constitution of the body being settled, there can be no change, in its general character, without the knowledge and approval of the people ; neither can any of its fundamental principles be altered, or rescinded, unless a majority of the Circuits express their concurrence in such alterations.”

(A Digest of the minutes, institutions, polity of the Methodist New Connexion. 1862 p177)

The original 5,000 members came chiefly from the industrializing towns of the North and formed about 60 societies, grouped into seven circuits. By 1812 there were 42 circuit preachers (what we would call ministers) and 210 local preachers. The MNC grew slowly but steadily, as shown by this table

There were also missions and branches in Ireland and Canada.

The MNC was always primarily a northern English denomination: in 1851 it was virtually absent in southern England and was still absent from half the English counties in 1867. Two-thirds of the chapels were north of a line from Stoke on Trent to Hull, mainly in the towns. There was no presence in Scotland, and only a handful of chapels in north-east Wales. This is illustrated by the image, which indicates the spread of the connexion in 1907.

An Irish mission was started in 1798, and then missionary work took place in Canada and Australia. From 1859 MNC missionaries were working in China, where the work was centred on Tianjan (also transliterated as Tientsin) in the north-east of the country.

E.A. Rose concluded that the MNC was small, urban, middle class, with intellectual pretensions. Their chapels tended to be classical, and imposing e.g. Bethesda, Hanley.

The urban work of the church was taken further by William Booth, who was an MNC minister before he set up the Salvation Army.

A Portrait of the New Connexion of Methodists  Leeds: printed by Edward Baines,1815, 8 pp.

The Jubilee of the Methodist New Connexion; being a Grateful Memorial of the Origin, Government and History of the Denomination. London: John Bakewell, 1848, 450 pp.

Life of the Rev. Alexander Kilham, formerly a preacher under the Rev. J. Wesley, and one of the founders of the Methodist New Connexion in the year l797: including a full account of the disputes which occasioned the separation  London: R. Groombridge, 1838 408pp