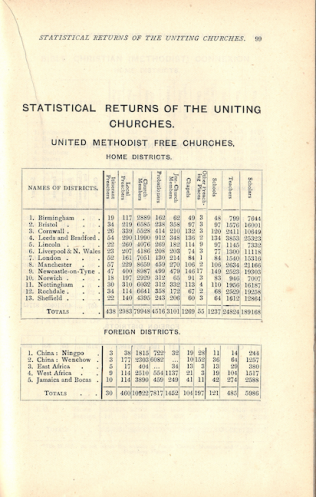 This body was the product of a union of the Wesleyan Methodist Association and the Wesleyan Reform Society. The two denominations entered into negotiations in 1851 with agreement being reached in 1856. The uniting Assembly met at Baillie Street chapel, Rochdale in 1857. Further Reform circuits joined individually over the next 10 or 15 years. The main strength of the denomination lay in the North and in Cornwall, although Norfolk and Lincolnshire chapels increased significantly in number during the latter part of the nineteenth century. This table illustrates the development of the UMFC.

The distinguishing features of the UMFC were circuit autonomy and freedom to be represented in the Assembly by whichever minister or layman they elected, with only four ex officio members. This represented an attempt to unite connexionalism and Congregationalism. Rooted in two movements which aimed to reform Methodism the UMFC was otherwise similar in organisation to the original Methodist movement. The hymn book had John Wesley’s portrait as its frontispiece.

The UMFC were also active in the overseas mission field. The earliest work was in Jamaica, and this led to work in Central America. Missionaries were sent to Australia in 1851 and to New Zealand and Sierra Leone in 1859. From 1861 the UMFC were active in East Africa, in what is now Kenya, and in China, where the work was in Ningpo and Wenchow.

A statistical account of the denomination when it entered into union with the Methodist New Connexion and Bible Christians is illustrated.

Details of Circuits, chapels and ministers may be found in the Free Methodist Manual 1898

Baxter, Matthew. Methodism: Memorials of the United Methodist Free Churches, with Recollections of the Rev. Robert Eckett and some of his Contemporaries.  London: W. Reed, 1865, ix, 514pp.