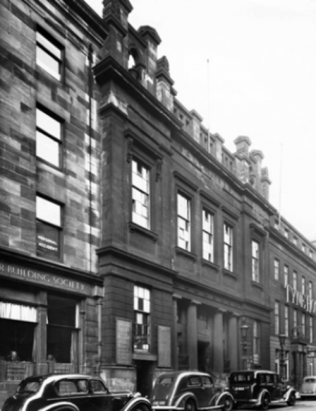 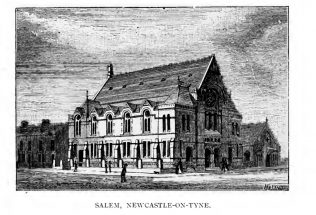 The Manor Chare chapel having become too small for the growing congregations and Sunday School by 1834, the members began the task of raising the money for a new chapel. Various bazaars were held raising substantial amounts of money and frequented by all classes of society. One example was of a sale in 1836 which raised £170 on the first day and over £200 on the second. Records show that the Trustees contacted all the titled persons and business owners in the area who gave generously. The foundation stones of the new chapel, then on an un-named street, were laid in 1835, by William Ridgway of North Staffordshire and afterwards 250 persons sat down to tea in the Music Hall itself recently opened.

The chapel was built by Richard Grainger – a name associated with the transformation of the centre of Newcastle and whose buildings still add elegance to the town’s streets. Grainger built other Methodist chapels in the town including that at Nelson Street for the Primitive Methodists and which stood adjacent to the Music Hall.  The Hood Street chapel was a tall building surmounted by turrets with a battlement over the centre part and with Grecian columns at its entrance. It could seat 750 adults and 185 children – the schoolroom being beneath the church. There were also four additional rooms and a caretaker’s house was contained within the chapel.

The new chapel was opened on 1 May 1836 and was given the new name of “Salem” which was inscribed in stone on the top of the building. Opening services were conducted by Rev Andrew Lynn to very large congregations and there was great joy in the first collection taken amounting to £166 – a staggering amount considering that wages were small and the cost of living high.  Prior to the formal opening, a tea meeting was held chaired by Mr Fenwick. Addresses were given by Dr Raffles and Joseph Barker.

Joseph Barker was expelled from the New Connexion Conference on account of his unorthodox teachings and destructive doctrines in 1841. He and his few remaining loyal friends took possession of the Hood Street chapel on 24 June 1841 and banished the congregation from the premises. They took up preaching in the Temperance Hall on the Groat Market and later at a private meeting room owned by Richard Grainger. They continued to work in the City opening a Sunday School in the Weaver’s Tower with an initial 15 children.

The Salem minister at this time was the Rev J Wilson who had had charge of the Manor Chare chapel seventeen years earlier. Seven years before returning to Newcastle, he and Barker had been colleagues at Chester which made the circumstances challenging in 1841. Rev Andrew Lynn was appointed to Newcastle, from Gateshead, in 1842, but his term of office was only for a year and there was no reconcilliation of the Society to its chapel during his time there. In 1843, he was moved to North Shields and in his place came Rev William Cooke, Connexional Missionary Secretary and President of Conference. Amongst his earliest results was that of restoring the Hood Street chapel to its rightful congregation.

On the first Monday evening of returning to the chapel, the members held a public tea in the schoolroom attended by 360. Although returned to their home, they were not left in peace as in July and August 1843, Joseph Barker and his party, under the cover of darkness, raided the chapel of almost everything that could be easily carried out including books, bibles, Sacrament cups and plates that had belonged to the Society since 1797; candlesticks, forms and tables; hymnbooks, the Quarterly Meeting dinner ware, a bust of John Wesley and even a fiddle.

The next Circuit Quarterly Meeting, held at Salem, added Wallsend Zion, Westmoor and Christer Pit to the Plan. It was decided that members at Salem along with the Rev W Cooke should attend Westmoor to, as far as possible, adjust their differences and restore peace and order to the Society. It was at this meeting that Rev Cooke discovered the full extent of Barker’s mischief since the Halifax Conference of 1841 had expelled him whilst he was stationed at Gateshead.

It was agreed that a public debate should be held at which these matters would be discussed and, hopefully, resolved. Terms of debate were drawn up between the speakers and the agreement signed on 18 June 1845. The first meeting was held in the Lecture Hall, Nelson Street on 9 August. The discussions rumbled on for many months but Rev Cooke finally won the day to much acclaim both locally and nationally and Jospeh Barker left the country for America.

Rev Cooke spent three years at Salem, rebuilding the ravaged Society and strengthening the Newcastle Circuit but ill health meant that for much of the time he was assisted by Rev H Watts of Gateshead Bethesda.

The Salem chapel continued to grow from strength to strength. In 1861, they would have had the Rev William Booth transferred from Gateshead Bethesda to Hood Street had Mrs Booth not voiced her objections during the Liverpool Conference of that year and their subsequent exit from the Methodist New Connexion. Circuit Plans for Newcastle in that era, have “resigned” next to Booth’s name at Hood Street.

At the time of Booth’s refusal to go to Newcastle, the Circuit consisted of Salem Hood Street, Zion Wallsend, St Peter’s Quay, Seaton Burn, Scotswood, Westmoor, Denton Burn, Elswick and Jesmond Vale. Several of the smaller societies had dropped out of the Circuit. In 1862, Denton Burn ceased as a New Connexion society and in the following year societies at Rose Hill and Garden Street (later called Snow Street) were added, followed in 1870 by Walker Mission.

In 1873, Rose Hill ceased to function. In 1884 Rendell Street and Hadrian Road were added with Lemington the following year. In 1886, South Benwell (Buddle Road) was added and Delaval the following year. The growth of the New Connexion was enormous and in 1872 the Hood Street Trustees began the task of looking for a new home. Matters began to press – the chapel would have to be relinquished if the £5,000 mortgage was not met. A verbal offer of £5,000 was made to the Trustees but the Chapel Committee refused this as they valued the property at £6,000. The question of disposal of the chapel was left in the hands of the Conference and the Trustees faced no alternative other than to sell and look for an alternative site which was found on Jesmond Road.

A committee was quickly formed to examine the possibility of moving to Jesmond Road but this came to nothing. By mid 1873, the debt on Hood Street stood at £1,100 and the Trustees agreed to sell as soon as possible by auction, with a reserve of £7,500 and to be held in May. It was their intention to open the new church free of debt and with all costs on the old chapel covered. The sale reached £7,000 and the Trustees accepted this and the money was banked.  The Salem Hood Street chapel was then made into a Gospel Temperance Mission Hall before being bought by the Church of England to become the Church of England Institute – later known as the Newcastle City Mission.

Once the sale had been completed, a firm of architects drew up plans for a new chapel costing no more than £4,300 although at the time no site had been secured. At the 1873 Trustees’ Meeting, it had also been agreed that the sale of Hood Street would be used to extinguish the debt on Garden Street Chapel and to build or purchase a house for the use of the Circuit minister.

In the meantime, the congregation met in the Mechanics’ Institute for Sunday worship, a building that later became the Newcastle Public Library. In 1875, it was decided to purchase an attractive site in Sandyford Road, where Archbold Terrace now stands. Sadly, after the Trustees had paid over £900 for the piece of land, a local resident objected to having a church in the vicinity of his house and the land had to be resold.

In 1876, agreement was reached to purchase land at Falconar Street, which was bought for £600. Adjacent to the site was a private school which the Trustees purchased for £950. After lengthy negotiations the school passed to the Trustees in 1897 and were opened on 17 November that year by Charles Fenwick MP and the building was afterwards known as the “Watson Memorial Hall”. Plans for the new chapel were drawn up by a Mr Lish and the tender of the builders – White, Sproat and Gibson – of £4,230 was accepted. (See Newcastle: Falconar Street MNC, for further information)