You are here: HomenextTopicsnextTemperancenextThe Billy Bray Tent of The Independent Order of Rechabites

The Billy Bray Tent of The Independent Order of Rechabites

part of the wider temperance movement 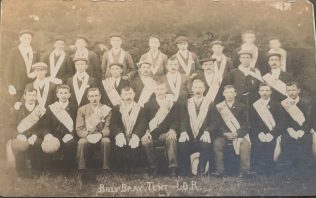 Here’s an interesting photograph the Billy Bray Tent of The Independent Order of Rechabites part of the wider temperance movement to promote total abstinence from alcoholic beverages involved in financial matters, it gradually transformed into a financial institution which still exists, and still promotes abstinence.
Called an Ancient Order of the Rechabites we learn from the Scriptures, a command was laid over 2,700 years ago upon the sons of Jonadab, the son of Rechab, that they should drink no wine, neither they nor their sons forever; and the injunction has been obeyed to this day.
Lodges are called tents because the Lord commanded the Biblical sons of Rechab to live in tents and the governing body, in England at least, was called the Movable Committee, meeting in a different city every two years. Membership remains open to all who would sign a pledge to completely abstain from alcohol for all religious or medical purposes. There were also death and sickness benefits. This Cornish tent – lodge is named after Billy Bray preacher and teetotaller.