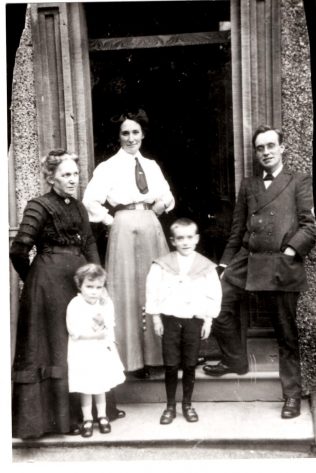 Born in Dolphin Yard, (now demolished in slum clearance) Norwich, Norfolk, 24 February 1877, his parents were James Utting and Caroline Gowing, of 44/45 Bullclose Road Norwich. His son Frank remembers taking his Grandma to the cinema in Norwich and quietly reading out the subtitles for her.

Arthur had two brothers: Walter who was in the shoe retail business and later manager of Freeman Hardy and Willis in Colchester. He married Adelaide Blower, but he died young, which was a great shock to Arthur. They had no children. (Son Frank remembers Walter and Addie staying in Clitheroe for their honeymoon and Walter leaving him his new hair cream- ‘Honey and Flowers’, and also brother Charles and sisters Harriet and Elizabeth (who became Mrs Took) Frank Utting wrote to all these, his uncles and aunts, from Ceylon where he was a Methodist Missionary and then Southern Rhodesia, every Christmas, until the Second World War.

Arthur left school at age 11 years and went to work in an uncle’s grocer’s shop. He was for a while apprenticed to a cobbler where he learned how to mend shoes, a skill he retained into later life. His son Frank remembers him mending family shoes, using a heavy last.

He belonged to the Calvert Street Methodist Church, Norwich, where we assume his parents were members. He attended the Young Men’s Improvement Society in the evenings and about the age of twenty he achieved a place at the Victoria Park United Methodist Training College in Manchester (around 1897).

In 1903 married Florence Gaze, whom he met locally in their neighbourhood in Norwich. She was born 7th December 1875 and lived in Bull Close Road Norwich. They married at Calvert Street Methodist Church in Norwich.

Their first son Francis Arthur James was born 18 January 1905 in Willesden, Middlesex, London where Arthur had his first ministry, with the United Methodist Free Church, living at 70 Manor Park Road. Another son Norman had died when very young.

Olive was born 3rd October 1908 in Middleton, where Arthur had his second ministry at Sadler Street United Methodist Church. They lived at 65, Rochdale Road in view of the cricket ground in what was possibly the old police station.

The Third ministry was Moor Lane United Methodist Church Clitheroe. The family lived at Holmes Cottage, Woone Lane, originally a mill cottage built in the middle 19th century for a mill supervisor and his family. Here Muriel was born 4th June 1914, with the assistance of a Nanny Tudor, after another sister, Marjorie, died just a few months old.

Next was a ministry at Catford London, where the family lived at the Manse at 53 Torridon Road Catford SE6, with fruit trees at the back and where in the Summer of 1916 a Zeppelin was brought down in flames over Crystal Palace.

Following London was Gateshead in 1921, 3, Ashgrove Terrace, where there was no significant front or back garden, but a three storey terrace house with bay windows.

The next ministry was from 1928 in Leeds. The family home was the Manse, Lavender Walk, off Accommodation Road Leeds, (now demolished).

Next they moved to 10 Nursery Mount, Hunslett Carr, Leeds. Son Frank came home there after two years in Sierra Leone at Fourah Bay College. Frank then married in 1930 Hilda Batey whom he had met when the family lived in Gateshead and they were students together at Armstrong College, Durham University. Arthur officiated at their wedding which was also attended by the Bishop of Sierra Leone

For Arthur the Leeds ministry was very rough, unhealthy and unforgiving. Arthur died there in 1931 and is buried in the cemetery there near to the railway line and the main road to Wakefield at Woodhouse Hill Cemetery, Hunslett, Leeds. His family was of course then homeless, because their house belonged to the Methodist Church. Florence his wife went to Ceylon for a year to stay with her son Frank and family and died in 1948 in Leicester. Olive and Muriel went to stay in Leicester, near to Robert Pattison, Olive’s betrothed.

*Manchester Theological College was founded in 1881 to train students for the Primitive Methodist Ministry. In 1906 it was renamed after the industrialist/philanthropist William Hartley.

Part of one of the many Obituaries to the Rev A.W.Utting

Extract from the Minutes of the United Methodist Church Annual Conference

‘…At Newcastle he was elected chair of the district. At Gateshead he was President of the Methodist Council and of the Gateshead and District Sunday School Union. At this time he also served on the Connexional Missionary Committee

At Leeds he held the posts of President of the Leeds Free Church Council, the Christian Endeavour Union and the Secretaryship of the Young People’s Committee.

When the Wesleyan Conference met in Brunswick Chapel Leeds, in 1930, Mr Utting as President of the Leeds Free Church Council headed the deputation to offer official greeting from the Free Churches. As spokesman on that occasion he made a profound impression. The address stamped him both as an orator and a well read man. He surprised even those who knew him best with his eloquence, his felicity of speech and his wide range of thought. His was described by a well known critic as one of the happiest speeches of the week….’