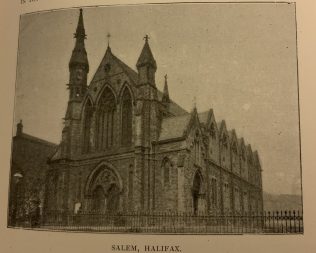 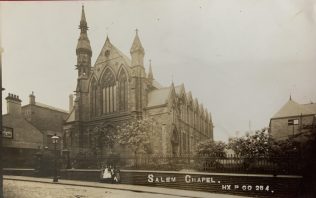 This series showing MNC Methodist New Connexion churches
Salem Chapel Halifax was enlarged in 1871-1877. The foundation stone of the new Chapel was laid on 28th August 1871 by J. H. Brierley of London. On 4th December 1872, the dedicatory services for the new Chapel began.

There was a burial ground around the Chapel.

A Sunday School was built just north of the Chapel [1857]. By 1870, this was so full that a branch church and school was started in Hanson Lane.

The Church closed in 1964 and was demolished a few years later when the road system in the area was redeveloped. The congregation moved to the new Salem Church at Richmond Street.