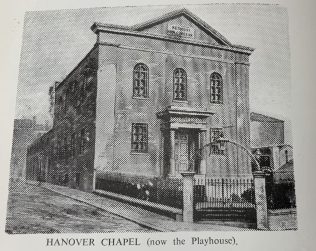 This was the second New Connexion Chapel in Halifax – a daughter Chapel of Salem Methodist New Connexion Chapel, North Parade the head of the Methodist New Connexion Halifax South Division [1856].
The foundation stone was laid on 1st October 1834. The Chapel was constructed at a cost of £3,200 which included £2,900 for the land. £1,070 was raised by subscription.
The Chapel opened on 1st January 1836. £603 8/- was raised in the first collections at the Chapel. The building was 60 ft by 48 ft with a gallery.
An organ was installed by 1837 at a cost of £270. There was a burial ground at the front and on the east side.
There was a Sunday School beneath the main building.
A Temperance Society associated with Hanover-street Chapel Sunday School is recorded in 1840.
The separate Hanover Methodist Sunday School was built in 1869. The Chapel closed in March 1943.
In 1945, the building was bought by the Thespians for £2,500, and converted into the Halifax Playhouse. Productions began in September 1949. The original covenant prevented the sale of alcohol on the premises, but this was overturned in 1977 by mutual consent between the trustees of the Chapel and the Thespians.