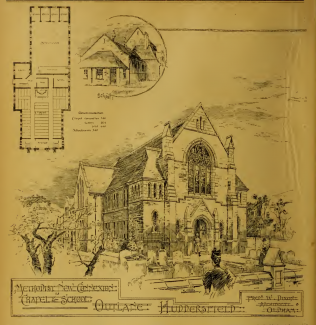 The foundations for this chapel were laid on 10th May 1893 and it was described as being “built to replace a structure nearly a century old, on a very exposed site on the moors, three or four miles out of Huddersfield”. The architect was Frederick William Dixon (1854-1935) who had been a partner in Potts, Pickup and Dixon before running his own practice.  Like Edward Potts he was a Methodist, serving as a Circuit Steward and Sunday School Superintendent. He also served as Mayor of Southport.

Dixon’s main problem was apparently how to fit the new building in among numerous existing graves. The chapel was designed to seat 560, and could still do so in 1940. The chapel closed in 1964, with the congregation joining Outlane Trinity, and the building was demolished in 1977.

If anyone has a photograph of this building it would be appreciated.