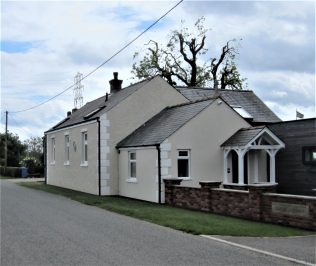 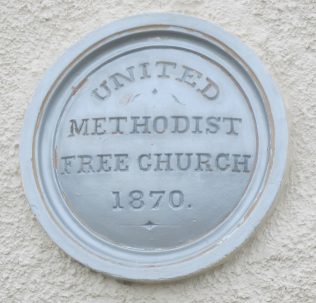 Fenhouses (Fen Houses) is a small hamlet in the parish of Swineshead. This former chapel, built in 1870 under the auspices of the United Methodist Free Churches, stands on Fenholme Drove. It was possibly an offshoot of the UMFC in Swineshead which had seceded from the Wesleyan chapel there.

It is written that just 13 folk turned out for the opening. It is also written that 30 turned up for the tea that followed.

In keeping with national changes, it became United Methodist in 1907 and then simply Methodist post 1932.

A substantial rebuild in 1928, owing to increasing numbers, included extending the building by 12ft lengthways; adding a vestibule and kitchen; and the construction of a new roof which was raised by 4ft. It was probably at this time that the exterior brick walls were rendered. New seating supposedly accommodated 150 persons.

In spite of an expanding Sunday school – a reported 82 scholars – there was no separate schoolroom.

During the re-opening ceremony, the ‘unlocking’ was performed by long-serving trustee John Ellwood, and the address given by circuit superintendent the Rev T Tims Waylett.

A stone above the new entrance (facing the road) was engraved with the title United Methodist, although partly obscured by the later addition of a porch. This stone is now set into the boundary wall of the property. A wall plaque on the north elevation reads: United Methodist Free Church 1870.

(Among items from the old chapel advertised for sale in 1928 were 1,000 corrugated roof tiles, 30 ridge tiles, tongue & groove boarding, joists and window sashes.)

In 1959 the trustees advertised for a chapel caretaker, a small cottage being available for the post-holder. Few wayside chapels could boast such a perk, but from its beginnings this place had the backing of several well-to-do individuals.

The exact date of closure is not known but presumably towards the end of the twentieth century.

This is yet another former place of worship to have been conserved by its incorporation into a larger and attractive residence.