You are here: HomenextChapels and churchesnextLincolnshirenextCowbit United Methodist Chapel, Lincolnshire 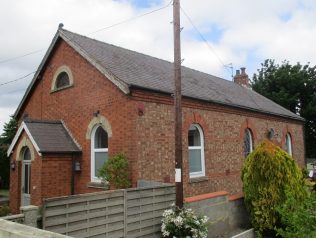 Situated on Barrier Bank, this building is no longer a chapel.

The Wesleyans had a meeting room in Cowbit included on the Spalding Wesleyan circuit plan in 1819. A certificate for a dissenter’s place of worship was issued in 1822. There are references to a new build in 1842, but maybe this was a partial rebuild – only fourteen years later it was described as “an old Methodist chapel”.

It is said that it was rebuilt (again) in 1861 when the chapel leaders called it “the oldest chapel around”. By this time it had become United Methodist Free, any remaining Wesleyans having taken flight.

Plans for a new chapel on a plot adjacent to the old (earmarked as a Sunday school) did not materialise. Instead, the new plot was sold, the old building demolished, and a new chapel erected on the same site. It opened in 1912 as United Methodist, the foundation stone having been laid on 18th July. The opening on 21st November was performed by Mrs Eva McLaren, wife of the local Member of Parliament.

Built of red brick, with stone and brick dressings, there were sittings for 150 and a folding partition to close off the Sunday school area. William Jepson of Spalding, whose father was well-known as a circuit steward, was the builder. Although smaller, it is not dissimilar to the one he built for the United Methodists in Gosberton (now the Co-op).

A stained glass window (extant), depicting Jesus and his mother, was installed in 1939 and overlooked the pulpit. Commemorating three generations of the Bean family, it was presented belatedly by the widow of local farmer John Bean who died in 1928.

The chapel closed circa 1985 – it was no longer on the Spalding circuit plan after 1986 – and is now a private dwelling.