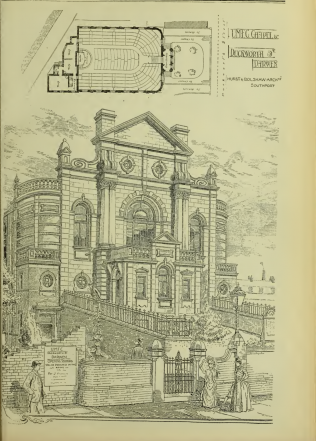 The chapel replaced a previous chapel, buiult in 1839 and enlarged in 1861. is described as having in an ampitheatre plan, and could seat 650. the schoolroom was in the basement. The accommodation was 663 by 1940.

The original chapel had been erected in 1839 and enlarged in 1861. The UMFC must have been doing well in Darwen for another upgrade in accommodation so soon after the last. The foundations were laid on 11th May 1887, and the chapel opened on 23rd August, 1888 The illustration does not give details of the actual preachers at the opening. Can anyone tell us who they were?

The building was demolished in the 1960s.